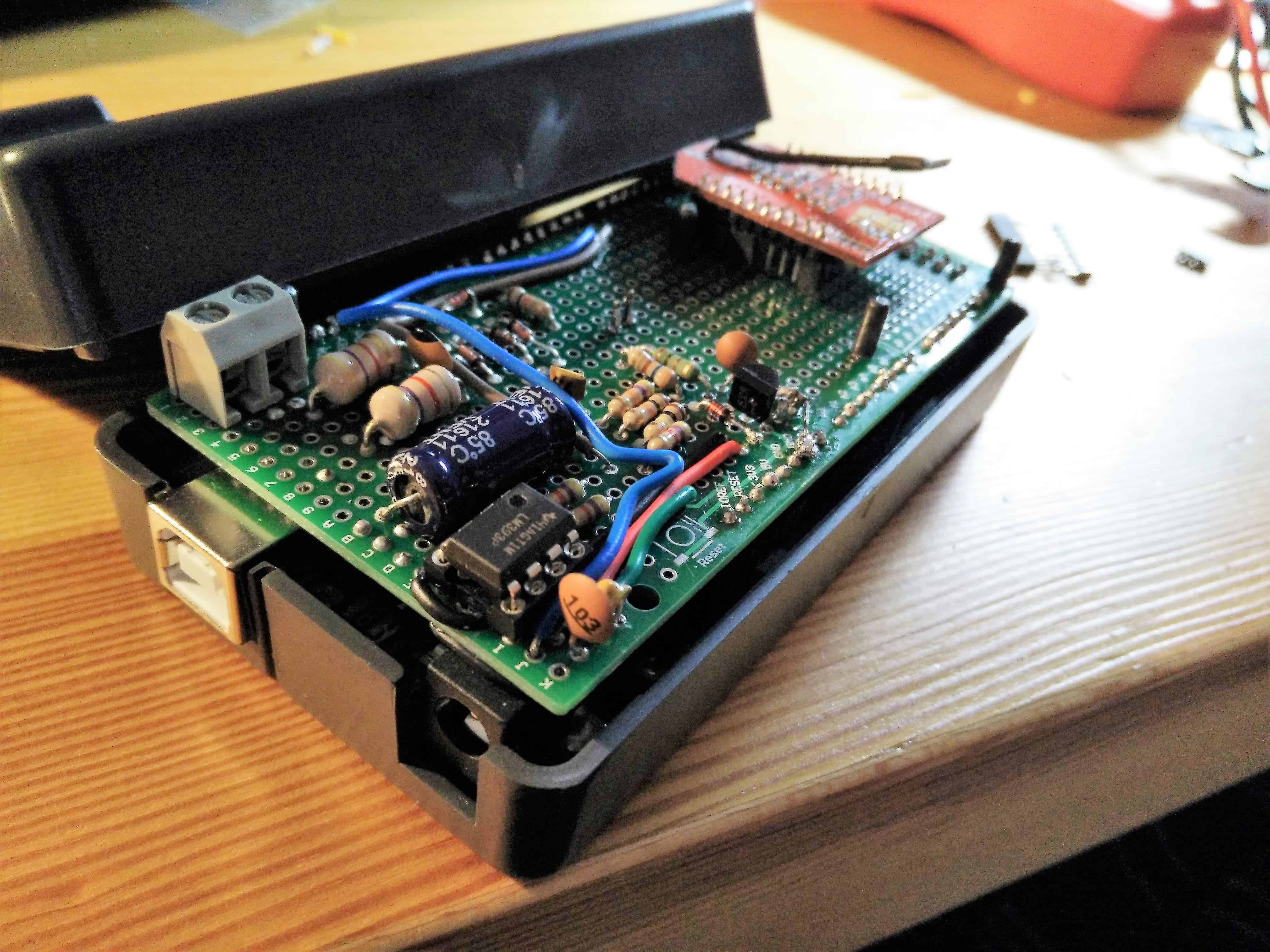 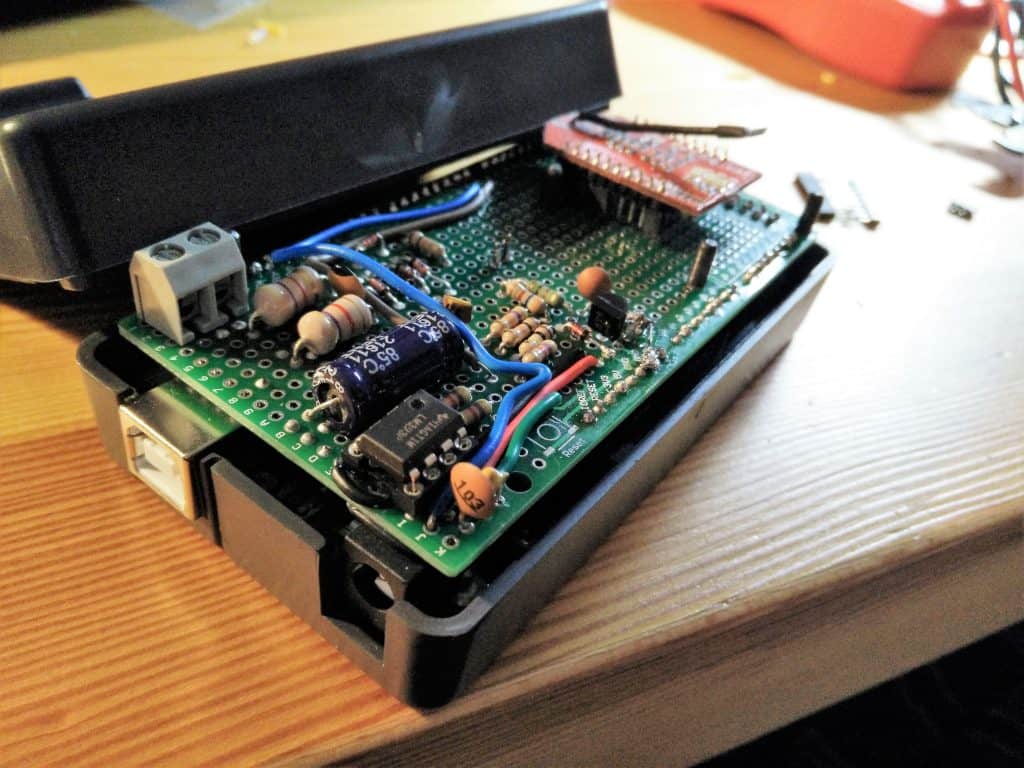 In the previous post the main characteristics of the EMS (Energy Management System) Bus from Buderus were exposed. In this post, the hardware and software used to connect and exchange information with the boiler through the EMS Bus, named Calduino, will be presented. In the next post you will see how to import in weeWX the information gathered and how to control from an HTTP web page the boiler configurations.

To reproduce this tutorial you will need three hardware components:

The EMS Bus cannot be connected directly to the Arduino Serial Ports (UARTs). First of all the bus signals have to be TTL-converted. To do so you should build a small circuit. If it it is your first experience with electronics, don’t worry about this step. I am basicly a software guy, have almost forgotten all my electrical engineering lessons and soldering has always been a big drama for me. Nevertheless, I was able to build the circuit and integrate it successfully with the rest of components.

The schema of the circuit is depicted in the following diagram: 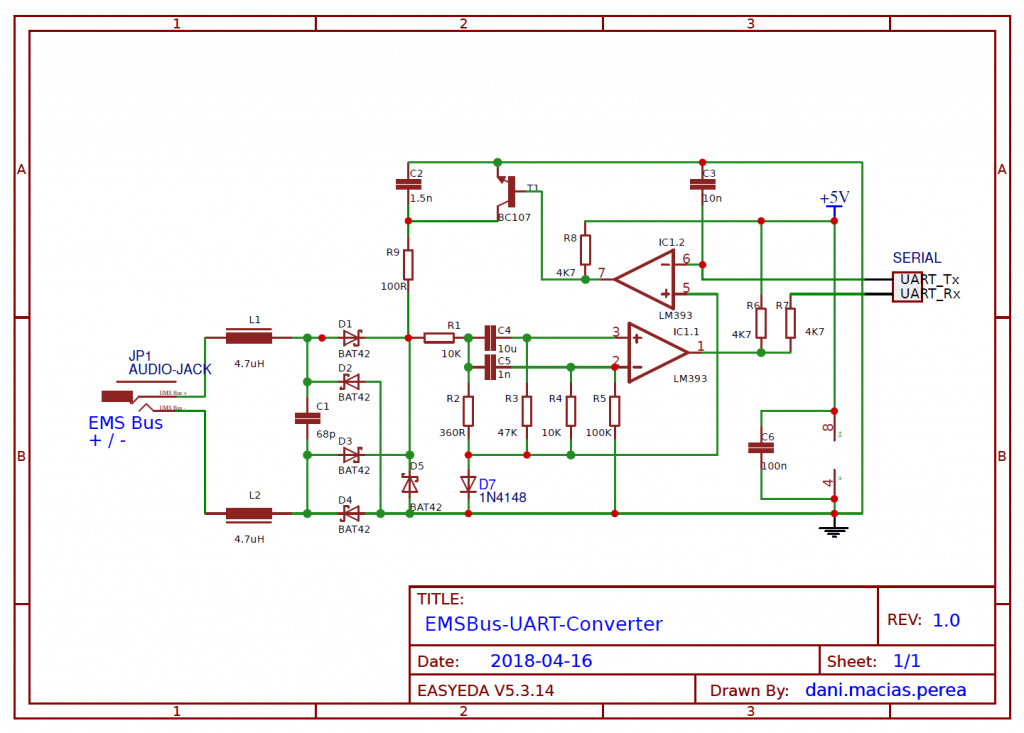 You can download a PDF file of the schema under this link or access the online version in easyeda.com. The schematic is an adaptation from this NetIO-EMS-Converter and bbqkees circuit, which is based in a reverse engineered schematic of a Buderus Service key. The TTL-converted signals (UART_Rx and UART_Tx) can be directly connected to one of the the Arduino Serial Ports. It does not matter which EMS bus pin is connected to each pin. The bridge rectifier (4 BAT42 diodes) will make both orientations work.

Make sure to power the LM393 Dual Comparator with the 5 V and ground lines. Although not noted in the diagram, the power rating of resistor R9 should be of 1 W. You can use this shopping cart list in reichelt.com to acquire easily the needed components.

Due to the physical situation of my boiler, a simple connection between the Raspberry/domestic router and this circuit using a RJ45 arduino shield was not an option. That should not be a big problem seeing that nowadays there are plenty of inexpensive ESP 8266 WiFi modules. However I decided to use a more robust alternative taking advantage of the fact that I already had the WiFly module unused at home. 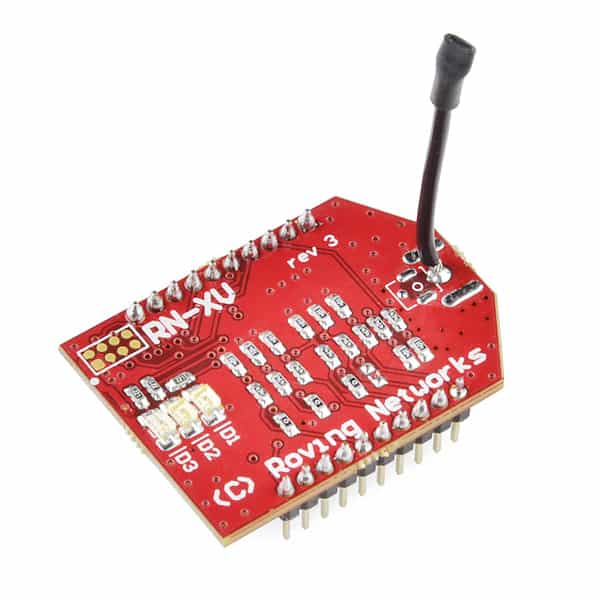 The formerly Rovin Networks 171 XV module (nowadays Microchip) incorporates 802.11 b/g radio, 32 bit processor, TCP/IP stack, real-time clock (updated via NTP), crypto accelerator (WEP, WPA-TKIP, WPA2-AES compatible), power management unit and analog sensor interface. It has a relative low power consumption with 4 µA in sleep mode, 15 mA in standby,  35 mA in reception and 185 mA in transmission at the maximal power of 12 dBm (the transmission power is configurable from 0dBm to 12dBm), being its operating voltage 3,3 V. The module has 8 general purpose digital I/O,  3 analog sensor inputs and a TTL UART interface that can reach up to 464 Kbps. It is mounted in on a XBEE compatible connector as shown in the next image:

The RN-XV module is pre-loaded with Roving firmware to simplify integration and minimize development time. It can be easily configured and managed over the UART or wireless interface (via Telnet) using simple ASCII commands. The module has two modes of operation: Data mode and Command mode. In Data mode, the module can accept incoming connections or initiate outgoing connections. To configure parameters and/or view the current configuration, the module must be placed into Command mode.

The first time you power up the module, an initial configuration should be performed to save your domestic network information.

By default, the module is in Data mode after power-up. Commands must be sent to the module through the UART or remotely via Telnet:

Warning: the RN-XV TX and RX Pins are 3,3 V tolerant. If you use an Arduino whose operating voltage is 5 V, you may use a level shifter in the TX Pin (RN-XV RX Pin). Otherwise you risk to damage your RN-XV module. On the other hand, the RN-XV Transmissions (TX) at 3,3 V signals will be considered logical ones in the 5 V Rx  Arduino. Follow this schema to connect your RN-XV module though UART.

Once in the command mode, you should perform an initial configuration to connect the device with your domestic network.

To do so type the following commands:

Note: Avoid using non alphanumeric characters in the SSID or passphrase. I have assumed that your domestic network will use WPA or WPA2. In the improbable case that you still use WEP, use set wlan key *10/26 key characters*.

To solve the IP address and gateway with DHCP protocol.

The Set commands only modify the RAM copy of the system variables. Some commands. such as setting the SSID, require a save and reboot before taking effect because they operate only upon power-up. Other commands can be changed on-the-fly. So to apply the configuration (and close the connection) run:

After a few seconds your device should be connected to your domestic WLAN. If you were forcing ad-hoc mode stop pulling up PIN 8 before restarting. To reconnect via telnet you should find out which address has been assigned to the device.

The RN module is really powerful. In theory, with its built-in TCP/IP stack and GPIO access, it can act as an standalone device. It should be even possible, in theory, to create a serial port using its UART or two GPIOs (software serial) to talk directly with the EMS Bus. However, I have decided to use the module though the Arduino Mega. By doing so, I think I have acquired more flexibility and reliability in the project.

You can access the full commands specification of the RN-XV module in this document.

There are several versions of the firmware, being the oldest ones somehow buggy. Before starting a project like this, it is a good idea to update it. The device should be able to perform an on the fly update. However, Microchip acquired Roving Networks and the default FTP server used by the module no longer exists. To solve this issue, before updating, you should change the FTP address used. To do so, once the device is connected to your domestic LAN and has internet, access the command mode and do:

It will just delete the IP address of the FTP server.

The FTP client uses the backup string to download the firmware via the ftp update command.

It will save the parameters in a configuration file named ftp and will try to perform the module update. After a few seconds you should be seeing something like this:

Then your device should be connected again and updated to last version 4.83 (april 2018).

In the following table the meaning of the module LEDs is described.

Theoretically, to build this project, an Arduino board with only one serial port is needed. This port should be connected to the EMS Bus – UART interface. The WiFly module is known to work correctly from software serial ports. However, developing Arduino code in a hardware with only one serial port would have been harder, making it unable to debug/monitor the code and forcing to disconnect everything every time you want to upload new software versions.

For this reason I decided to use an Arduino Mega 2560 V3, which has 4 times mores SRAM and UARTs than Arduino One (8 KBytes – 4 UART ports). 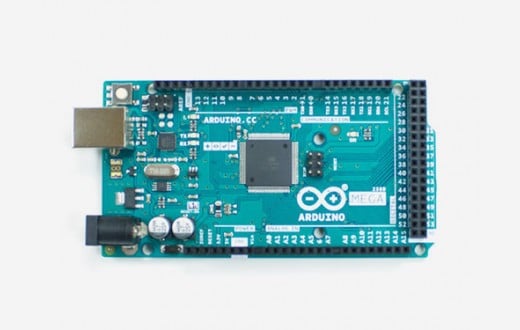 Calduino: Puting it al together

The figure below shows the full schema of the project, putting all the components together. You can download a PDF file of the schema under this link or access the online version in easyeda.com. Its name, Calduino, comes from latin word calor (heat) and arduino. 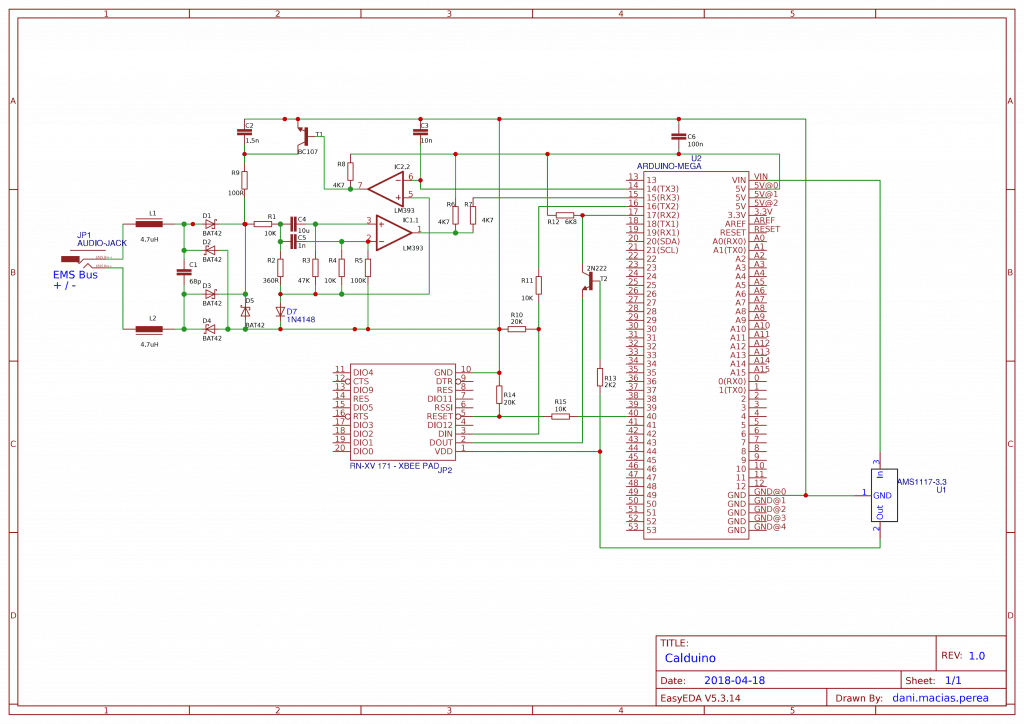 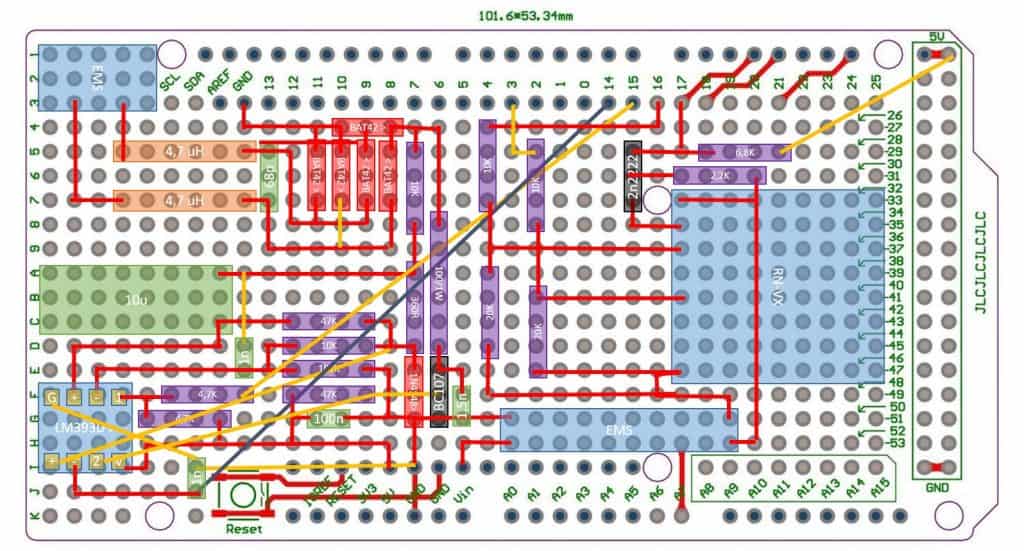 To make this project easily portable I have developed a C++ library with the most common functions offered by the EMS Bus. The last version of Calduino library is available in my Github page. This library, as well as WiFlyHQ library are used by the sketch CalduinoWiFly.ino to connect wirelessly with the EMS Bus.

Its documentation can be found in this link. Some design notes:

As previously commented, the sketch developed (CalduinoWiFly.ino) will have a passive role and will not start any operation by itself. It will be used as a bridge between the web server (running on Raspberry Pi) and the EMS Bus. This way, if a user sets the thermostat temperature to 20℃ in the web page formular, the server will send a set command to Calduino and will wait until it is performed.

Calduino commands are sent in HTTP GET requests. The parameters needed by the command, such as the type of operation or the temperature requested, are coded in the query string. There are three types of Calduino commands:

The following table summarises the commands supported by Calduino. For more detail in the parameters used, have a look at the comments in the code or see the corresponding section in this entry:

Note: calduino is assumed as the host name of the device where Arduino is running. I recommend to configure your DHCP server to assign a static IP to calduino linked to its MAC address as explained here.

Get commands are very easy to use. Just send the request and, after a few seconds, you will receive an XML with the information asked. For instance:

In the first versions of the library I used to include a return tag to include current timestamp in Unix Epoch Time using the RN-XV module Real Time Clock (RTC). However, since the synchronisation with SNTP (Simple Network Time Protocol) servers is not stable and the internal RTC has a very big deviation, I decided to remove this functionality. Only in case there is an error with the EMS command, the message will include a return tag with 0 value.

Calduino will then perform the set operation and check if the value has been correctly updated. If the test is positive it will return the updated value. Otherwise the answered XML will only contain a return tag with 0 as value.

You can try this behaviour by setting the DHW temperature outside its limits:

Some comments regarding the code

13 thoughts on “Calduino: Connecting Arduino with the EMS Bus”