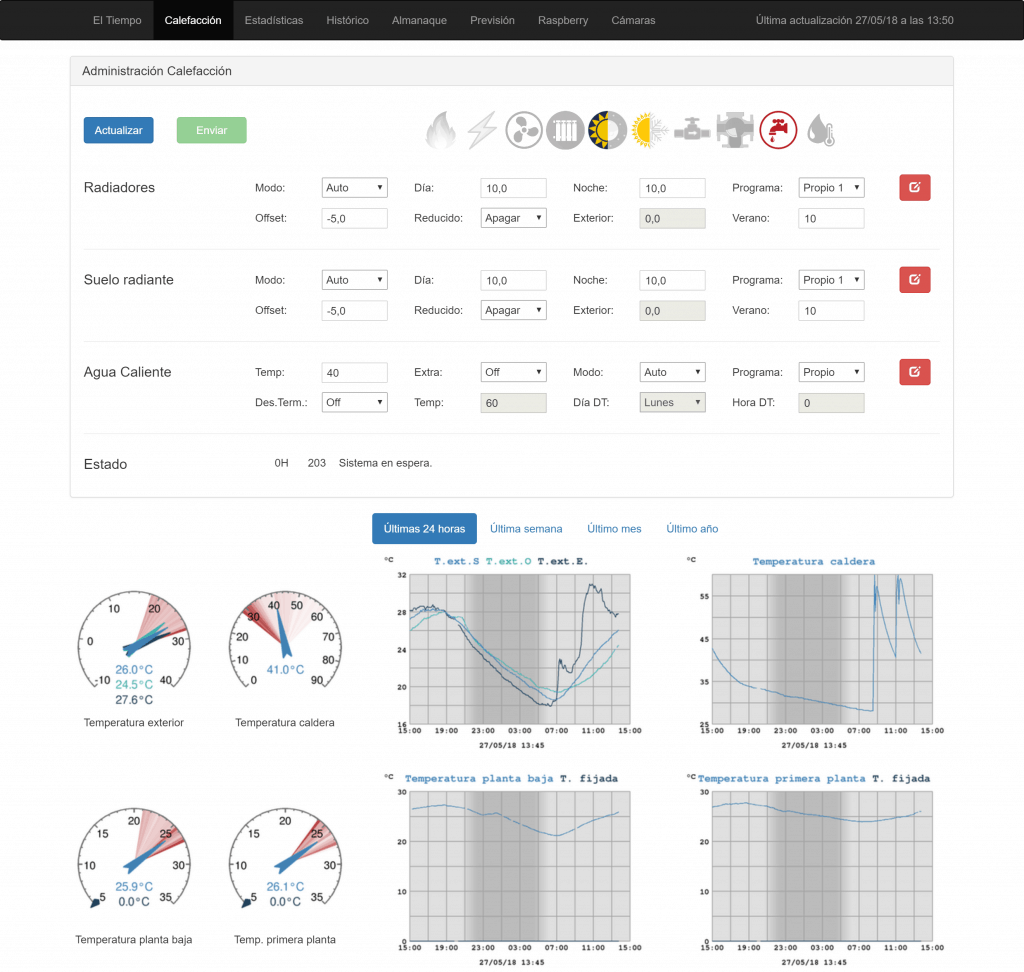 In the two previous posts we commented the main characteristics of the EMS Bus and described Calduino, the hardware and software used to connect and exchange information with a Buderus boiler though this bus. In this post you will see how to create a weeWX extension to import the information gathered and how to control the boiler configurations from an HTTP web page.

WeeWX has a data/event driven architecture. It uses different drivers to communicate with the connected weather stations (hardware). When a sensor spits some data out, weeWX does something. This action can be either generate an HTML report or perform some calculations with the data gathered. These actions are called services.

The drivers are Python code that reads from serial port/USB/network interface the bytes sent by the hardware and decodes them, putting the resulting data into LOOP packets and archive RECORDs. In my case, I use the WMR89 driver to recieve the meteorological conditions. A weeWX instance can only have one driver, so in order to incorporate a new source of information, one or more services should be incorporated.

WeeWX services are bound to events and there can be more than one service bounded with the same event. There are different types of services, listed in the following table:

In general terms we want to augment the data included in the archive RECORD and save it in a database. To so do, two data services will be needed:

As it has been commented before, a new database will be used to save Calduino data. It will just contain a number of the parameters included in the Get All Monitors command. Not all the parameters contained in this command will be saved. Some of them are just current configurations/status of the boiler. It may be of interest to show them in the HTML report in real time but it makes no sense to save them for the future.

The following table summarizes Calduino’s database schema. Note that the field names coincides with the used in the XML tags:

The last service being run in every weeWX iteration is weewx.engine.StdReport. This is the standard service for creating reports. Each report has a skin associated with it, which contains the templates, any auxiliary files such as background GIFs or CSS style sheets, and a skin configuration file, named skin.conf. In order to see the data gathered and manage remotely the boiler, a new skin, named calduino and packed in this extension, has been developed.

To create their output skins rely on one or more generators, which are those that do the actual work, such as creating HTML files or plot images. The Calduino Skin included in this extension is just a proof of concept and uses only two generators:

Additionally, you may also use other generators such as the GaugeGenerator to show, in a friendly way, the information gathered by Calduino. I have developed, based on the work of Nick Dajda’s Gauge Generator, a type that can include up to three observations from different data sources. More information can be found in this project.

Finally, you will surely want to use the ImageGenerator to create graphics regarding the boiler status. It is up to you decide which generators you want to run and what information you want them to provide.

To install the extension using the wee_extension utility follow this steps:

In the first run WeeWX will create a new database named calduino.sdb with the previously commented schema. As stated above, the Calduino Skin and templates included in this extension is just a proof of concept with very few options. Edit the template files to include graphics and/or gauges of your boiler as desired.

The file calduinoControlPanel.html.tmpl contains an AJAX form/panel that interacts synchronously with the Calduino device connected to the EMS Bus. It has been designed using Bootstrap. Javascript is used for calculations and user interaction. In the server side, a PHP file calduinoWrapper.php.tmpl performs the communication with the Calduino device using libcurl library.

The next image is an example of Calduino Extension running on my weeWX.

Included in the extension, in /tmp/pollCalduino folder you will find a bash script called pollCalduino.sh. It will be in charge of polling Calduino device connected to the EMS Bus and updating the XML file that will be imported by weeWX’s extension. To do so, it will launch the php operation getGeneralMonitor  every minute ended in 3 or 8 (as explained in this post). To work properly it should include the IP address of Calduino in  \etc\hosts.

When a communication problem is detected (i.e. the operation fails), an IFTTT notification is sent to my telephone. The steps done to configure your IFTTT account were explained in this entry. You should just create a service named calduino_error and include your IFTTT key in the script. Moreover, I use a 433 MHZ transmitter module installed in the Raspberry to remotely turn off and on the calduino device, as it is connected to a radio frequency controlled socket. More information about this can be found here. If you are not going to use this functions just comment these lines.