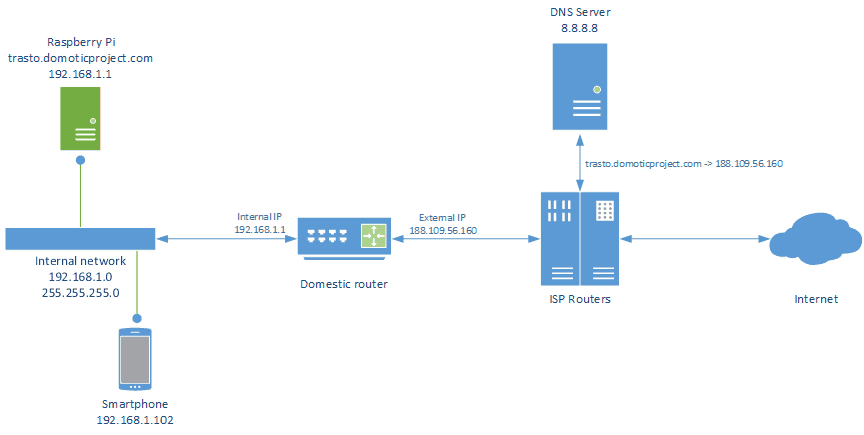 Imagine that you are using your smartphone’s browser to reach your Raspberry Pi, whose hostname is trasto.domoticproject.com. Your smartphone does not know what the IP of the hostname is, so it first asks the question to the configured DNS Server. It will usually be your ISP’s DNS Server or Google’s DNS Server, depending on your DHCP configuration. If the DDNS configuration is working correctly as explained in this post, the DNS server will translate the hostname using your router’s external IP. So, once the DNS question is answered, you smartphone will try to access to your Raspberry Pi by accessing the IP 188.109.56.160, which is simultaneously its external IP Address.

As you can note, the problem you are facing is, basically, that your smartphone is trying to reach a host which is in the same local network as if the host was located outside this network. This connection will usually timeout because your router, instead of redirecting the HTTP Request to the Raspberry Pi locally, will send it to the ISP Router, which will redirect it again to your router, which  usually will not be able to answer to an HTTP Request sent by himself.

An easy solution to this problem could be to edit the host file of your smartphone or computer. This host file maps hostnames with IP Addresses. By adding the host trasto.domoticproject.com to the IP 188.109.56.160 the problem should be solved. In a computer this operation is relatively easy, however in a smartphone you will surely need root access. However, if your device leaves the local connection (for instance if you take your laptop to work), you will need to remove these changes from the host file.

The solution: a DNS Server in your Raspberry Pi

A more elaborated solution would be to install a DNS Server in your Raspberry Pi. This way the DNS queries performed by the devices in your network will be addressed to the Raspberry. The Raspberry then will redirect them to an external DNS Server, except for those aiming your domain/host, which will be answered locally. For instance, if you try to reach www.google.com from your smartphone, your Raspberry Pi DNS Server will forward the query to the external DNS Server. Once a reply is received, this will be resent to your smartphone. However, if the host address is trasto.domoticproject.com, the DNS Server will directly reply with the local address of the server, solving by this way the problem we were facing.

Moreover, installing a local DNS Server in your Raspberry Pi will provide with a number of advantages:

In this tutorial we will see how to install Bind. If BIND is not of your preference, there are some other DNS Servers, such as Dnsmasq (focused on leaving an small footprint) or pi-hole (whose main aim is to filter adds). First of all install the software packets by typing:

The most important files to configure BIND are the following (note that named and BIND are two names for the same application):

The standard configuration of BIND will provide you with with a cache/forwarder DNS Server that will recursively seek answers from other DNS servers when a client issues a query. This means that your Raspberry Pi will do the work of querying each related DNS server in turns until it finds the entire response. You can read more about how DNS works on this site or in this comic. Once the answer is received, your local DNS Server will reply to the client and will save it in a cache file. In the future, if a client places again the same query, the answer will be considerably faster.

Let’s have a deeper look at this basic configuration in named.conf.options file.

After implementing the changes save and close the file. By now you should have a DNS server able to forward queries and save them in cache. If you want to know more about other BIND options, such as the maximum time for cached records, have a look at this link.

The configuration files syntax can be tested using the following command:

Keep an eye on the server logs to make sure that everything runs smoothly. You should see in your log that the process whose name is named is in status running after a few seconds.

Let’s try now to make a DNS Query to our new server. At the beginning of this post we installed dnsutils, which includes dig, a program to query the DNS in various ways.

As you can see, a query has been sent and the answer has been received in 21 milliseconds. If you repeat the process after a few seconds, you will find that the query time is significantly reduced to 1 or 2 milliseconds.

Note that the time a query is stored in your DNS server cache will depend, apart from BIND‘s configuration file, on the TTL of the record. As you can see in the first dig query, the TTL of domoticproject.com is only 30 seconds. After that, the cache information will time out and, if a new query is received, it should be forwarded again.

Configuring Clients with the DNS Server

In a next step you should configure your devices to use your new DNS Server. Note that this step will usually depend on the Operative System of the device used. However, and depending on your router, this can be archived very easily changing the DHCP configuration. DHCP is a protocol that dynamically assigns IP Addresses and other network configuration parameters to each device on a network so that they can communicate with other IP networks. One of this network configuration parameters is the DNS Server. In the following image it is shown how to assign the primary DNS address to your BIND Server, leaving the secondary address to Google’s DNS. 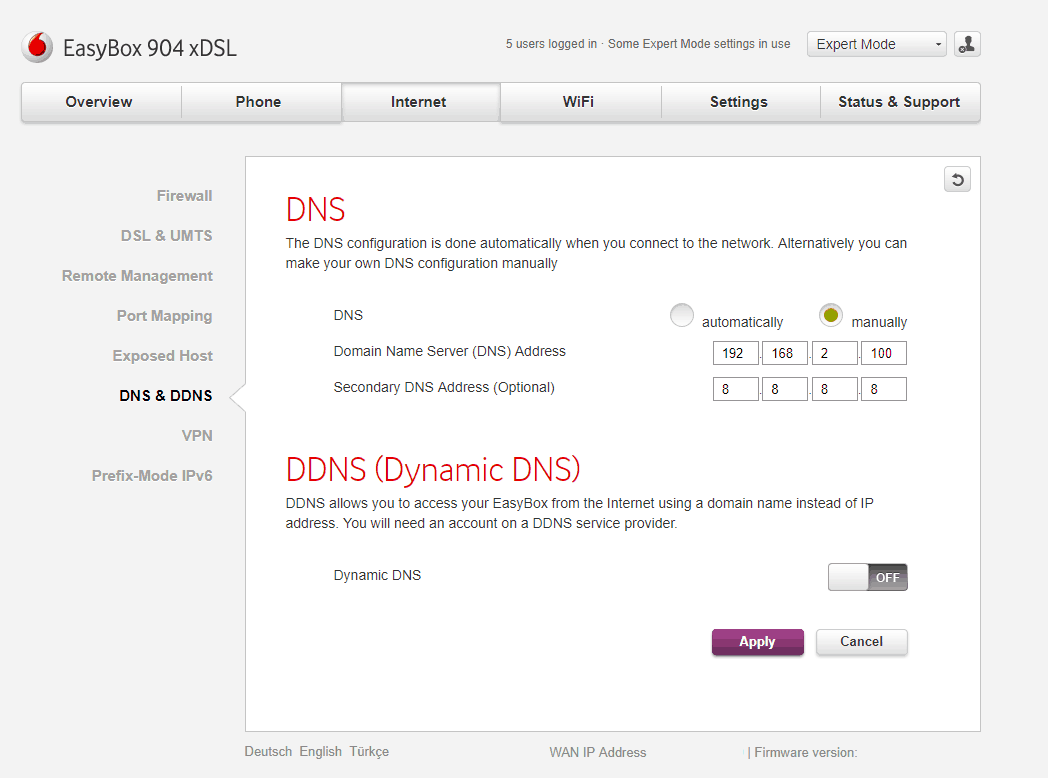 Alternatively, you can also change manually the DNS Servers to be used in your device. For instance in Windows you should access the Network and Sharing Center and change your internet connection properties. More info can be found in this site. 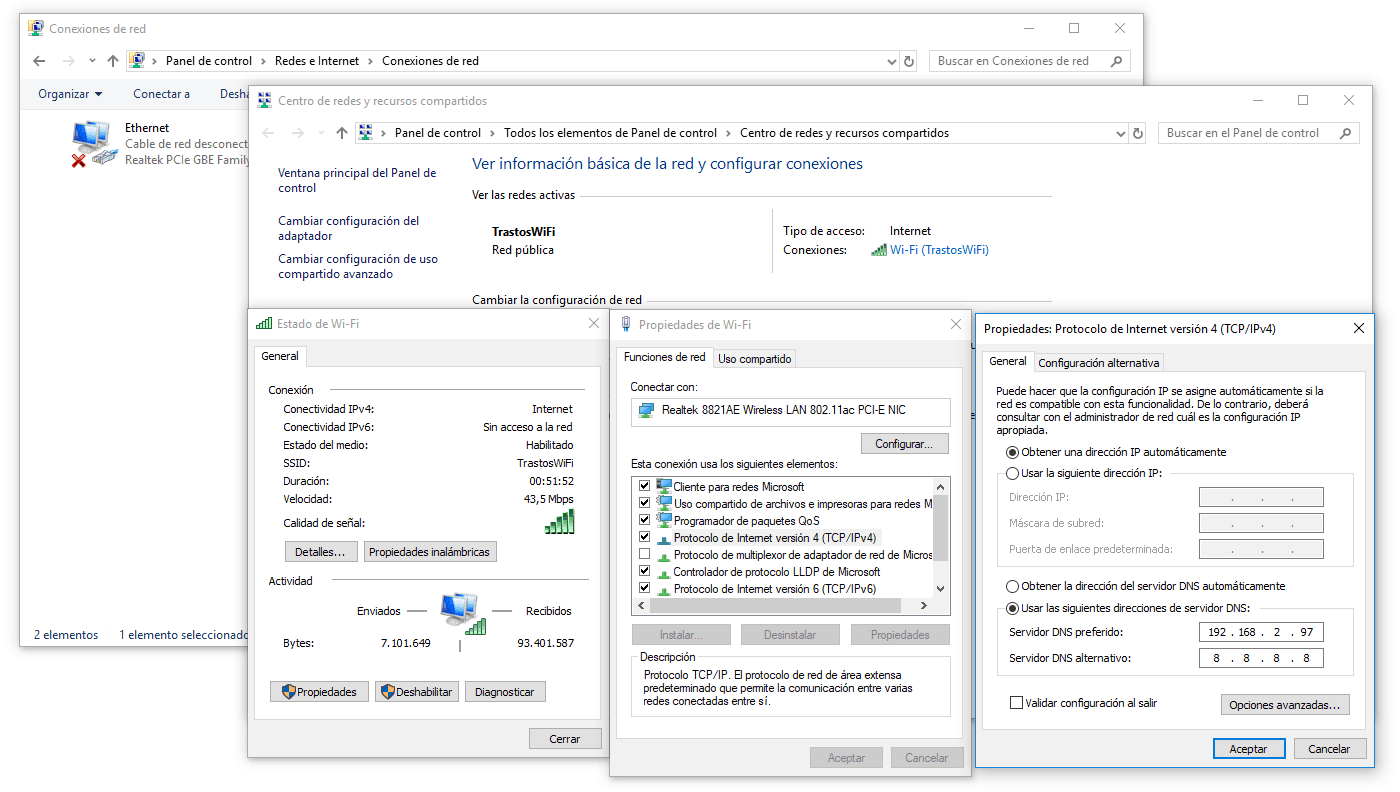 On a linux system this change is much easier. You can follow the instructions in this post. Alternatively, you can also edit the resolv.conf file and include the following line:

If you want to change the DNS of your Android device, just follow this instructions.

After implementing the changes, you should be able to use your DNS Server from your device.

Once BIND is working correctly as a cache and forwarder DNS Server, the next step will be to define a local zone. To do that you need to edit the file named.conf.local and declare the zone to be solved locally there.

Open the file with your editor and make the following changes:

These changes should be enough for our purposes. However, you can also create a reverse zone file to enable the translation of your host IP address to the hostname. You can find more information about creating a Reverse Zone File in the following site. Remember to restart the BIND server to read and to implement the changes done.

Once your local zone is created, it is time to test it. In windows just open a command line and type:

As you can see, your hostname is now solved locally, returning the address of your Raspberry Pi. If you are already running a web server, just open your browser and try to access to your hostname. Where you used to receive a timeout, you should be able now to access your server without problems.

12 thoughts on “Configuring a DNS Server in Raspberry Pi”