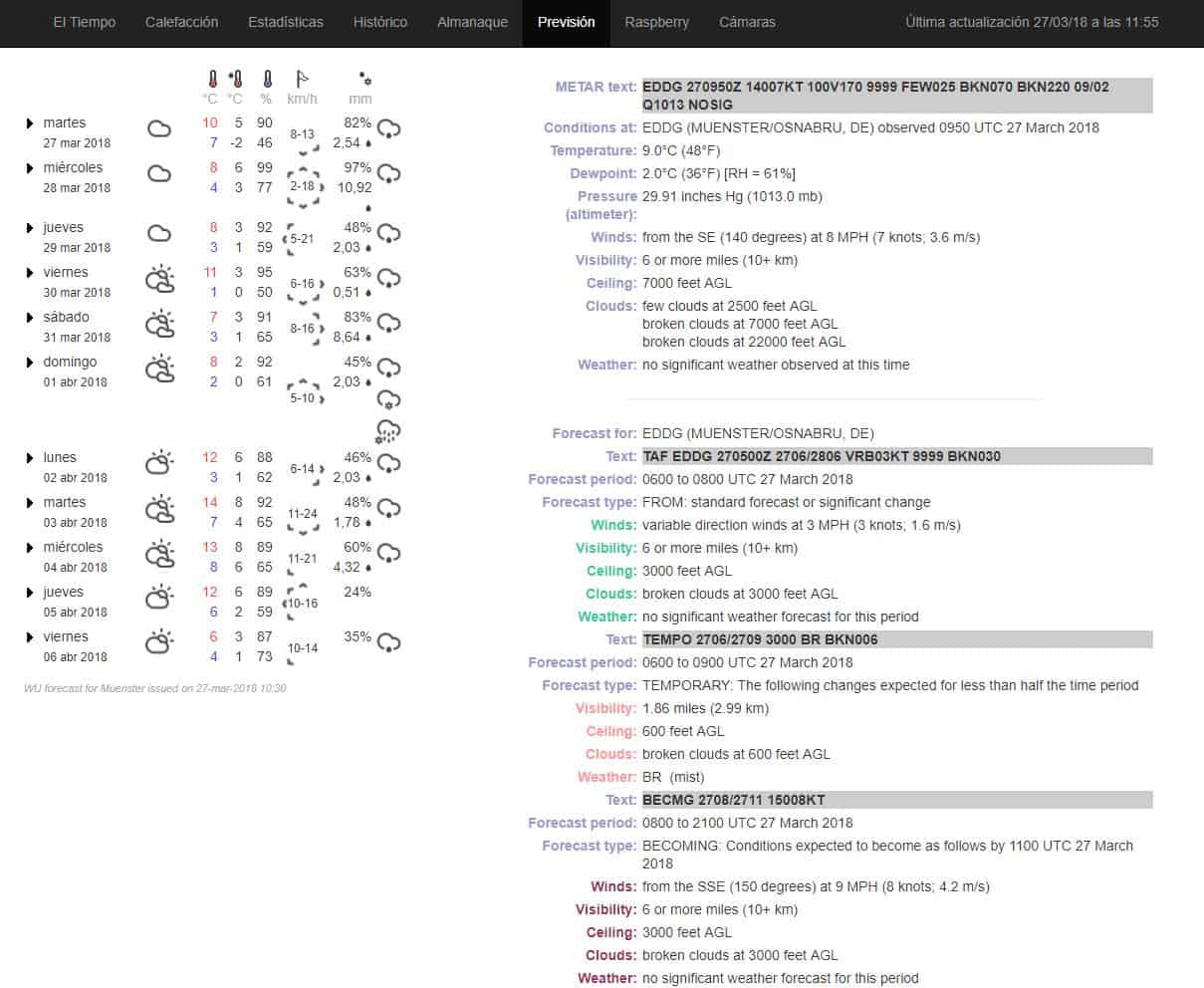 I find METAR weather reports the most useful format to get the current meteorological situation in a few lines. Thanks to weeWx architecture, it is very easy to extend your meteo station capabilities to include and import new information. In this post you will see how to extend the Cheetah Generator in order to include METAR reports in weeWX for a list of airports. You can find the code of this extension in my Github account.

At a high level, weeWx architecture consists of an engine, called StdEngine, managing a set of services. A service consists of a Python class which binds its member functions to various events. The engine arranges to have the bound member function called when a specific event happens, such as a new LOOP packet arrives. If you want to know more about the services being run by default in a weeWx installation you may read this post.

In this topic I will create a new service, subclassing off the SearchList class. This class is a list of Python objects used by the Cheetah template engine. The Cheetah engine reads each template and when a tag starting with $ is found, it scans down the search list and tries to replace it by its value. For instance, if the tag $example is found, it will first try to use example as an attribute. This means that it will try to evaluate obj.example. If that raises an AttributeError exception, then it will try example as a key. It is obj[example]. If that raises a KeyError exception, then it moves on to the next item on the list. The first match that does not raise an exception is then used. If no match is found, Cheetah raises a NameMapper.NotFound exception.

Our aim is to create an extension of the search list that encodes the functionality of obtaining the last available METAR report for the airports configured.

First of all create a new Python class by extending the Search List. Then place the file in the executables folder (BIN_ROOT). In my installation it is located in /usr/share/weewx/user/. In the overrided initialization method (init) it reads the configuration parameters contained in the subsection MetarReport of the Skin where the extension is used. I have defined two parameters. The first one is the refresh_interval. It regulates how often the METAR report should be updated. The second one will be commented in next section. It is a list of the airports for which the METAR report will be generated. The airport should be included according to the ICAO airport code.

Then override the method get_extension_list. This function should return a list of objects whose attributes or keys will be searched by the Cheetah Engine. It will iterate over the airports defined in the MetarReport subsection. For each airport, it will try to obtain the last available report. If this function fails, it will read the METAR backup if it exists.

The METAR reports are obtained from Aviation Weather Center. This is a service of the National Weather Service of the USA. I modified the url https://www.aviationweather.gov/adds/metars?station_ids=OACI_CODE+&std_trans=translated&chk_metars=on&hoursStr=most+recent+only&chk_tafs=on&submitmet=Get+Weather to request the most recent report translated for an specific airport. It is a free service and its reliability is not 100%. Due to this reason I decided to save the METAR obtained in a backup file. By doing this, if the METAR HTTP request fails, the backup file can therefore be processed and included in my web. The METAR reports are issued actually every 30 minutes.

In order to run this extension, you should include it in the Cheetah Generator. To do so, open the skin.conf file of the skin where the METAR information will be used. Edit the CheetahGenerator section to include your new search list.

Finally, define a new section called MetarReport to include the two parameters required by the extension. These are the refresh interval and the OACI code of the airports.

To print the METAR report in a weeWX report just include the tag $OACI_CODE + _metar wherever you want to show it.

Remember that the report should be generated by the skin where the search list extension has been included. Otherwise the tag will not be found. For instance:

13 thoughts on “Including METAR reports in WeeWX”